BRIDGE NDI 3G is a 1RU gateway offering high density conversion from 3G-SDI to NDI, and NDI to 3G-SDI for both multi-channel HD and 4K/UltraHD. Designed to drop into any existing NDI or SDI workflow as a plug and play appliance, it's easy to deploy and administer. 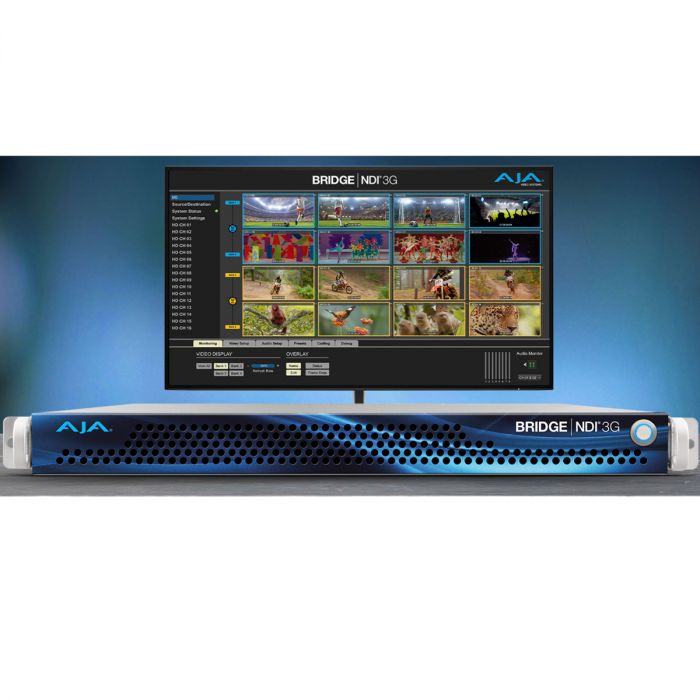 Hardware
BRIDGE NDI 3G is housed in a compact 1RU chassis and yet offers high density I/O with 16 bidirectional 3G-SDI connectors as compact DIN 1.0/2.3 spigots for all baseband video inputs and outputs. Included with BRIDGE NDI 3G are 18x DIN 1.0/2.3 to BNC connectors to make installation into an existing SDI infrastructure easy. BRIDGE NDI 3G boasts dual 10GigE ports for control and all NDI I/O, providing support for up to 16-channels of incoming or outgoing NDI streams.
Remote or Local Control
BRIDGE NDI 3G can be controlled locally using a mouse and keyboard with the appropriate VGA-capable monitor. All functionality of BRIDGE NDI 3G is also accessible remotely, allowing easy control via the same intuitive UI.
Video and Audio Support
SDI I/O BRIDGE NDI 3G supports YCbCr, 4:2:2 10-bit video with up to 16 embedded channels of audio, up to HD and 4K/UltraHD 60p. 4K/UltraHD SDI I/O supports either Square Division or 2SI.

SDI Outputs can Freerun or use an External Reference for timing. System wide audio default can be set for 2, 8, or 16-channels of audio across SDI and NDI I/O.
Operational Flexibility
BRIDGE NDI 3G offers enormous flexibility in how all 16-channels can be utilized:

All HD channels can be used to encode from SDI to NDI, or decode from NDI to SDI.

HD channels can also be placed into 4K/UltraHD groups enabling dual or quad SDI signals to be used for 4K/UltraHD encode from SDI to NDI, or decode from NDI to SDI with support for both Square Division and 2SI.

BRIDGE NDI 3G is also able to encode SDI to NDI and decode NDI to SDI simultaneously, offering a gateway conversion that can connect SDI and NDI work areas with ease.
All Encode
BRIDGE NDI 3G can be configured so that it encodes all incoming SDI inputs to NDI outputs. This mode supports the following:

8x Simultaneous up to 60p

4x Simultaneous up to 60p

BRIDGE NDI 3G can accept up to 16 incoming HD baseband video signals via 3G-SDI and apply NDI encode to each, allowing up to 16 individual HD NDI channels to be output via 10GigE. Those 16-channels of 3G-SDI can also be utilized to enable eight dual channel Video and Key Groups to NDI outputs, or four quad or dual channel 4K/UltraHD Groups to NDI outputs.
All Decode
BRIDGE NDI 3G can be configured so that it decodes all incoming NDI inputs via 10GigE ports directly to the SDI outputs. This mode offers the following:

8x Simultaneous up to 60p

4x Simultaneous up to 60p

Up to 16x NDI or NDI HX inputs can be decoded to uncompressed baseband HD video for output via 16x 3G-SDI outputs.

BRIDGE NDI can also decode up to 8x NDI streams plus alpha channel for conversion and output as 8x dual 3G-SDI HD Video and Key channels. And when decoding up to 4x 4K/UltraHD NDI streams, the 16x connections can support either Square Division or 2SI for SDI output.
Encode/Decode Combination
It’s also possible to utilize the BRIDGE NDI 3G to provide a combination of both decode NDI to SDI and encode SDI to NDI.

For an all HD workflow where both encode (SDI to NDI) and decode (NDI to SDI) are needed simultaneously, BRIDGE NDI 3G supports 8-channels in each direction.
Use Case: Education UltraHD Studio
The BRIDGE NDI 3G Education use case shows an UltraHD equipped College TV Studio. The four UltraHD cameras output Quad Link 3G-SDI to the SDI inputs of the BRIDGE NDI 3G. The BRIDGE NDI 3G encodes the video to NDI and shares this via the College LAN (Local Area Network). Within the College LAN are various NDI compatible destination/sources, including an NDI Video Production Gallery where the UltraHD NDI video feeds can be monitored, and editorial decisions can be made in real time. There is also an NDI graphics suite that can receive NDI video from the studio for visual mixing of screen graphics that can be delivered back to the NDI Video Production Gallery via the LAN as an NDI source. The program content output of this pipeline can be shared to multiple NDI points within the College, including classrooms and auditoriums, allowing lectures, presentations, and other large scale events to be shared easily and in real time at high quality. Finally, the AJA BRIDGE LIVE takes the program NDI content output and provides another share point, this time for internet streaming in UltraHD in high quality H.265. Embedded audio is used for the TV studio UltraHD video feeds. BRIDGE NDI 3G offers a compact, always-on solution for sharing even the most demanding video formats and audio on a standard LAN infrastructure.
Use Case: eSports Studio
The BRIDGE NDI 3G eSports use case shows a BRIDGE NDI 3G at the heart of a busy studio set up. Two studios are providing video feeds from a four player competitive event. Studio 1 provides each of the four gamers with two video outputs, one for a headshot HD camera and one output from a video game console converted from HDMI to SDI using AJA's HA5 Mini-Converters. A total of eight video feeds are provided to the BRIDGE NDI 3G, which is, in turn, encoding these feeds to NDI. Studio 2 features a head to head contest with a video feed headshot for each player as well as their video console output which has been converted from HDMI to SDI. The four SDI video feeds are connected directly to the 3G-SDI ports on the rear of BRIDGE NDI 3G. The commentary studio has four presenters who are covered by four HD cameras. These 3G-SDI camera feeds are also connected to the BRIDGE NDI 3G. The BRIDGE NDI 3G provides real time encoding of NDI feeds for each of the 16 video sources, which are shared via the NDI production facility LAN. Studio 1 and 2 video feeds can be folded back from the LAN to the commentary studio. The final mixed output from the NDI Production Gallery can be shared to any NDI destination, in this case taking the mixed, edited output to a streaming service via AJA BRIDGE LIVE. Embedded audio is used for each SDI video feed to BRIDGE NDI 3G. BRIDGE NDI 3G offers an easy way to connect NDI live production to SDI cameras and converted game console feeds, offering high quality encoded NDI outputs derived from 16 varied SDI sources.
Use Case: TV Production Studios
Here we can see a large scale TV channel camera system, four HD-SDI cameras per studio, in this case, covering shopping channel content. Two presenters' audio is embedded per studio. The sixteen total studio feeds are connected directly to the 3G-SDI ports on the rear of the BRIDGE NDI 3G. These 16 feeds are encoded as NDI sources in real time for the LAN connected suites within the NDI enabled production facility. All feeds are accessible from each NDI suite, allowing them to contribute to the final mixed outputs for each studio across the LAN. These mixed NDI outputs are then passed to the transmission facility via the SDI outputs of another BRIDGE NDI 3G, which decodes the NDI sources directly.
Use Case: Live Event With Studio
This BRIDGE NDI 3G use case shows how BRIDGE NDI 3G can be the central hub for encode/decode simultaneously, providing a backbone of conversion to serve both as an NDI to SDI converter and also for SDI to NDI. Three field cameras are positioned at a sports event, with SDI cabling connecting them to the BRIDGE NDI 3G. At the same time, a Studio at the stadium is also providing five NDI sources that include three NDI cameras, Studio on screen graphics as an NDI source, and also Studio NDI playback. The BRIDGE NDI 3G encodes the three SDI cameras to NDI, which are, in turn, passed to an NDI switcher. This NDI switcher also receives the five NDI sources from the studio. BRIDGE NDI 3G encodes the switched program output of the NDI switcher, and alongside Studio Playback and Studio Camera A, these are passed via SDI to an AJA BRIDGE LIVE, which handles encoding of the sources to H.265 via SRT. These are then passed via the public internet to the SDI postproduction facility, where another AJA BRIDGE LIVE provides SDI outputs for all three streams, and a final return feed from the facility to the live event of the final program. BRIDGE NDI 3G responds to the need for an always-on, encode/decode device that can be trusted to deliver high quality results no matter what the combination of tasks it is set up to perform. BRIDGE NDI 3G also makes the perfect partner to BRIDGE LIVE for those workflows that need to reach beyond the facility or event.
Industry-Leading Support
AJA’s technical support is recognized as among the best in the industry and is available to all AJA customers. If you need assistance with any aspect of your BRIDGE NDI 3G installation, configuration, operation, or encounter any technical issue, AJA Support will work with you to get up and running.

BRIDGE NDI 3G is covered by a generous three year warranty. Please see the Product Manual for additional specifics around warranty conditions for the product itself.