Connect to remote cameras up to 2 km away with multiple channels of video, talkback, control and power all over a single cable! 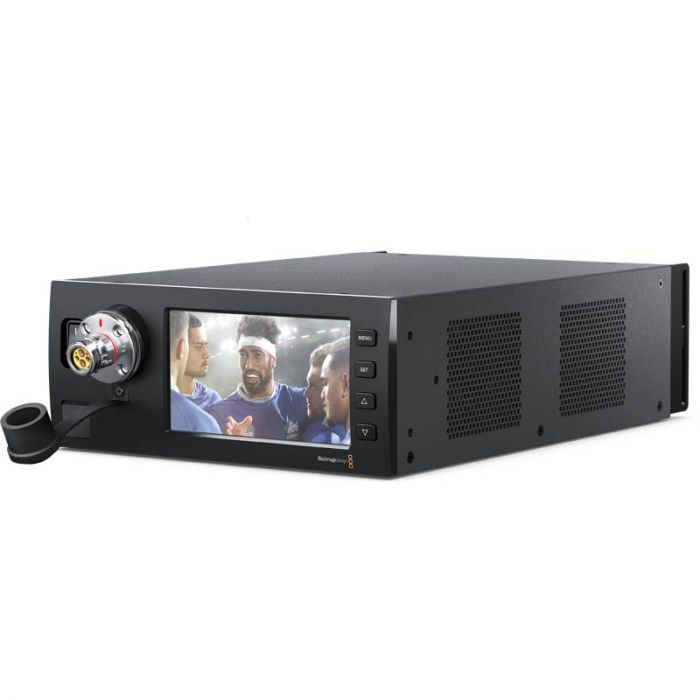 FEATURES
Work with remote cameras up to 2 km away from your studio or outside broadcast truck using SMPTE fiber
onverts SDI video, audio, and remote camera control connections into a single optical fiber cable, which connects to a Blackmagic Camera Fiber Converter attached to a remote camera
All video and data are transmitted using standard IP for extremely low latency broadcast quality video.
You get 12G-SDI for an HD or Ultra HD camera feed and 3 independent HD return feeds, along with standard connections for camera control, PTZ, two dual channel talkback intercoms, tracker talkback, tally and a 5 inch LCD screen for monitoring camera and return feeds
Provides power for your remote cameras and accessories

BLACKMAGIC STUDIO FIBER CONVERTER
The Blackmagic Studio Fiber Converter is used at the other end of your broadcast camera chain back in the studio or outside broadcast truck. It converts signals from the remote camera back into standard television industry connections that can be used with your live production switchers, audio mixers and talkback interfaces. It features a high capacity power supply to drive the cable so it can provide enough power for your camera and any accessories that you might add. The studio fiber converter includes connections for tally, two dual channel intercoms for industry standard 3rd party talkback systems, and even a backup engineering talkback channel in case the fiber goes down. You get a main Ultra HD camera feed plus 3 independent HD return feeds with full remote camera control, PTZ, tracker talkback and ethernet, all through a single SMPTE fiber cable. Plus, there is a large 5 inch LCD screen right next to the SMPTE fiber connection on the front panel for monitoring signals from the remote camera. This allows for easy patching and verification of the remote camera function.

The Blackmagic Camera Fiber Converter and Blackmagic Studio Fiber Converter convert standard television industry connections for video, audio, power, talkback, and tally into a single SMPTE fiber optic cable. This allows cameras to be placed up to 2 km away from a studio or outside broadcast truck using a single convenient and incredibly durable cable. The Blackmagic Camera Fiber Converter also adds familiar broadcast studio camera controls to the rear of the camera, plus additional connections so you can use it with the talkback systems and switchers you already have. The Blackmagic fiber converters feature 12G-SDI and are designed to work with all HD and Ultra HD formats up to 2160p60. Now you can transform professional cameras such as URSA Broadcast and URSA Mini into a complete professional studio camera with all of the features you need for high end work.

PLACE CAMERAS ANYWHERE
Get cameras much closer to the action

If you’re working in a studio or out at a large sporting venue, you often need to place cameras far apart. While SDI connections are common, the limited range of SDI makes it hard to use it over long distances. Traditionally, you would need to run multiple cables and expensive extenders for power, talkback, tally, video and audio. This makes set up incredibly complex and increases the chances of a technical problem. Now you can solve this problem by converting all essential connections and power into a single convenient SMPTE fiber cable that can run incredibly long distances. That means cameras can be placed anywhere and connected back to broadcast trucks parked outside of a venue or back to a central control room in a studio. Best of all, SMPTE fiber is a global broadcast industry standard so you can use cables and connection points that are commonly available. Blackmagic fiber converters are also affordable, so traditional broadcasters, new web broadcasters, AV producers, houses of worship and educators can all use the same high end broadcast technology.

Blackmagic fiber converters work with standard SMPTE 311M hybrid electrical and fiber optic cables with standard SMPTE 304 connectors on each end. These cables feature a 2 way fiber pair, data pair and power pair, along with a central strength member that gives it the needed durability for continuous use. Once plugged in, the Blackmagic Studio Fiber Converter automatically performs safety checks and then powers up, sending an industry standard 200 volts of power over the SMPTE cable for the camera and accessories. This means you can install cameras in remote locations without having to worry about power drops over long distances. Both the studio and camera converters at each end have dedicated micro controllers that continuously monitor power status. The converters communicate with each other to ensure that both a stable optical signal is present and that the power supply is operating within safe parameters. If a damaged cable or a earth leak is detected, the power is instantly shut down to eliminate any danger to personnel.

The Blackmagic Camera Fiber Converter and the Blackmagic Studio Fiber Converter use IP video because the SMPTE fiber connection is an open standard 10G Ethernet link. That means all of your video and return feeds are IP video based using high end, lossless broadcast quality 10-bit video encoding and decoding. All other connections such as talkback, tally, camera control and lens control are also converted to low latency IP so you get incredibly reliable performance and high quality. Using IP video means the Blackmagic fiber converters are future proof and ready for customization using high speed Ethernet infrastructure in future.

The Blackmagic Camera Fiber Converter and Blackmagic Studio Fiber Converter provide 2 dual channel digital talkback connections that are compatible with professional 5 pin XLR talkback headsets. The camera converter even has convenient controls for mixing in program return audio with your talkback headset so you can adjust the volume as needed while talking to the rest of the crew. The talkback intercoms can be used for both production and engineering. In addition, there is a backup channel available for troubleshooting in case the fiber link is down. This backup talkback channel automatically switches over and uses the data pair in the SMPTE cable if the fiber is not working. The Blackmagic Camera Fiber Converter also includes a standard 10 pin connection for tracker talkback, which is perfect when both headset connections are in use and you need to feed an additional talkback connection through to your crane operator.

The Blackmagic Camera Fiber Converter features an extremely durable all metal design that perfectly matches URSA Broadcast, URSA Mini cameras or any camera that supports a standard battery plate. It’s built to withstand the harsh demands of outdoor field production and 24/7 operation. The Blackmagic Camera Fiber Converter features full size standard television industry connections with dust caps, along with an integrated VLock mount plate on top for adding a studio viewfinder. The Blackmagic Studio Fiber Converter is designed so that you can fit two of them side by side in a standard equipment rack using the optional rack mount kit. The optical fiber connector on the Blackmagic Studio Fiber Converter is conveniently located on the front panel, right next to the built in 5 inch LCD, so you can plug remote cameras in and instantly see the feed.

What's in The Box